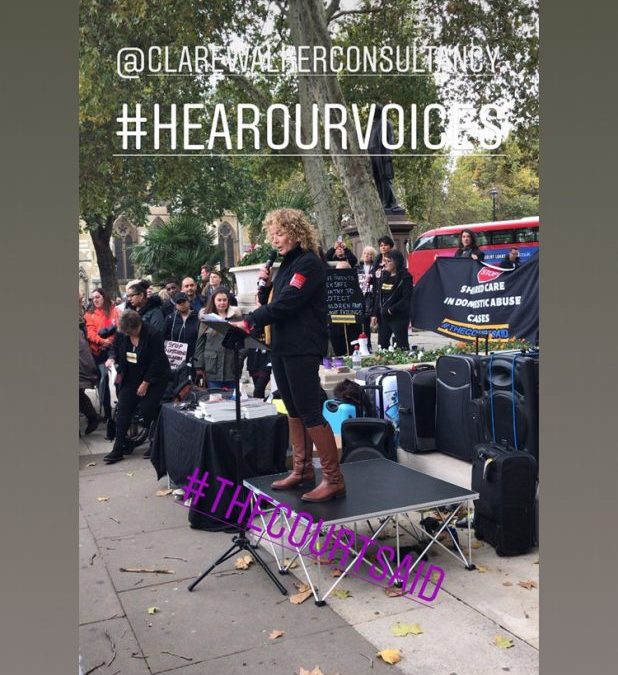 “Very recently I was asked by a fabulous lady called, Natalie Paige who heard me speak at “Stand Up To Domestic Abuse 2019 Conference”, to speak at her rally at Parliament Square in October 2019. The theme of the rally was the Family Courts and the campaign that she started over a couple of years ago, is  #TheCourtSaid.

What I spoke about was my understanding of the Family Court system and the fact that again, we have so much evidence and research, that states that it is gender bias.  That states where mothers, who alleged abuse of themselves and/or the children, have got an increased bias of losing custody of the children when it goes through the Family Courts.  And the Family Courts are like a secret society, you are not allowed to talk to anybody outside of the Court Hearing, you are not allowed to share any documentation outside of the Court Hearing, and that does include CAFCASS Reports, which may condemn and misjudge in fact we have read plenty of research, that says that is actually the case.

Just to give you some stats about what I spoke about on Parliament Square in the rain, with everybody else, was that if an abusive father has been convicted, and it is acknowledged that he is abusive, that he will still get custody of the children 14% of the time.  If there has been convictions and confirmations of child physical abuse, specifically, then the abusive father will win custody 19% of the time.

So, when mothers report mixed types of abuse, their custody losses skyrocket from less than 30% to over 50%, and this just begs the question;  what is the point of Safeguarding?  This family unit will have gone through Safeguarding processes with the Local Authority before it gets to the Family Court arena. 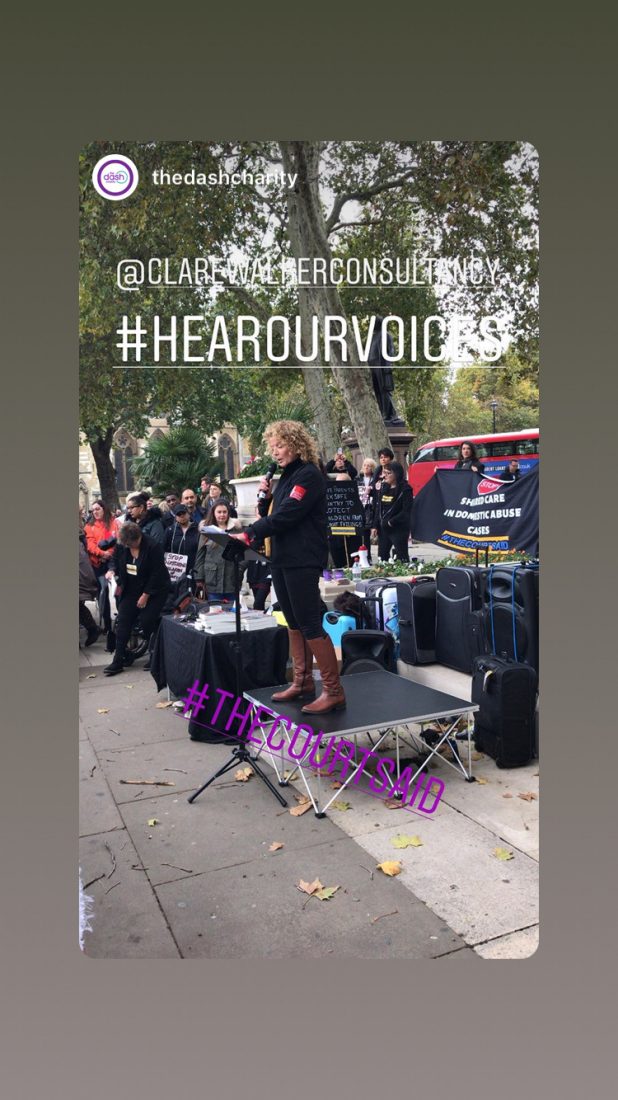 So, the Family Court’s performing in this bias and unjust way just denies all the values that our so-called Civil Society, has underpinned within its legislation.  The father’s counterclaim of parental alienation.  Now this is another area that is massively researched the world over.  It is not just here in the UK that we are hearing these stories who are bias against mothers who are victims of abuse.  Parental alienation has no universal definition, it’s a plastic theory and yet it is the bread and butter of CAFCASS officers and guardians within the Family Court arena, it is acknowledged and accepted by Judges in the Family Court arena.  So, when a father’s counter claim of parental alienation is used to deflect from evidence or allegations of abuse of the children, this increases the mothers loss of custody of the children from 25% to more than 50%.

It’s absolutely back to front that this is the case.  In terms of, if somebody breaches someone’s else’s Human Rights, which a perpetrator of any kind of abuse does exactly that by definition, then their Human Rights, they should be knocked off.  They have just breached somebody else’s, whether that is the mother and/or the children directly.  If the children are in that environment with the domestic abuse, the children’s Human Rights are also breached. See the details of these Human Rights on my NO MORE Campaign page.

You know we hear from children all the time where it is them picking up the phone to guide the Police into the house.  I was listening to a young victim just yesterday, talking about the fact that she had to guide the armed Police to the house, when she had rung up to tell them that her stepfather had just shot her mother, and then the armed police could not find them because they lived in a rural area, and this child was the one guiding them in and saying “turn left, when you see the big barn, you will see some cars around the side, keep going, down the dirt track”.  It is just absolutely abhorrent that we are asking victims, whether they are primary or secondary, to do our delivery of service and then be blamed for it all at the end.  It is just absolutely abhorrent.

And the CAFCASS Officers that I mentioned, there is plenty of evidence that suggests that leaves another layer of vulnerability with the victim.  So, the Family Court themselves standing alone will have a gender bias against the mother who is the victim and what her allegations and her protections for the children are.  She will, you know some prat will come out with his parental alienation and they will say “oh you just don’t want the dad to see the kids”, no she is just trying to protect the children and I have had this in my expert witness cases where the Police have evidence of the children being sexually abused by the abusive father and the Family Court, STILL grant access.  You just couldn’t make this up, you really couldn’t.  But when we have got CAFCASS involved as well, then the risk of the mother losing custody goes from 2.2% (so that is the Family Court parental alienation bolloxology that is already there!) it increases to more than 5.5% more likely to lose custody if there is a CAFCASS Officer involved and that will be if the child is saying they don’t want any involvement with dad, they are scared of dad, they have been abused by dad, they have put in Criminal Claims against dad, children who have had their own legal representation because they are 14 or above, to say why they don’t want contact with dad, CAFCASS will override all of their wishes and feelings and that is what they are meant to be there for.  So, mothers are nearly three times more likely than fathers to lose custody when alleging abuse by the other parent.  And when they alleged child abuse, their odds of losing custody increases to more than 4.2%.  So that is just brilliant isn’t it!

But I always like to end on a positive.  So, what is it we can do?  I have just identified a load of what we are doing wrong as a society.  So, it needs to be changed and it needs to change at every single level, as always.  Parental alienation should be abolished, it is no more appropriate in a domestic abuse case then mediation, it is just not appropriate.  CAFCASS Officers need to go back and do some training, they really need to stop being so gender bias in terms of what their work is and they need to start upholding the wishes and feelings of children.  Judges all the way down and through.  They all need Freedom Programme training, I would say that obviously because I am such a fan, but to be honest it is the only training where;

Training for professionals across the board.  Children’s social workers, legal representatives, CAFCAS have already mentioned Judges, all of it is absolutely paramount.  And then of course, we also need to change the law.  So, we do have parts of the law which are there to protect victims, primary and secondary when there is domestic abuse and services are involved.  That as a starting point, needs embedding and upholding.  I am getting really bored of explaining to Social Workers Practice Direction 12J of the Children’s Act, suggests and states that if there is domestic abuse alleged or evidenced, it is not appropriate to put the victim and the perpetrator in a room together and sit around a child protection conference, it just really isn’t.

So, the law is already there so that needs implementing and upholding rather than ignoring.  The changes to the domestic abuse bill, needs to be (the training I have already spoken about) and there needs to be a quality assurance across the whole system, in terms of the Family Courts.  And so when we have bias, ill informed, ignorant, professionals, whether they are Judges or all the way down, they are held to account and weeded out, told to go and stack shelves at Tesco’s.  If that is your belief systems, then go work with tins of beans, not people.  Yeah so that is basically how I rounded up my little rant on my soap box on Parliament Square in the rain with, I don’t know the hundreds of other people that were there as well.  Men, woman and children.  The visual presentation of children’s shoes laying across the grass from child homicides, where Family Courts have given abusive fathers their children and then they murder their children, so that they can continue to torment and abuse the mother, and so that never ends does it.  But that was quite a powerful image.  There was a lot of people there that couldn’t stay for the whole thing, they went and came back and had some time out, because it feels like this is such a bad situation, it must be, it must be somebody’s one bad case, it must be one bad Judge, it must be one bad Family Court system, but its not, its rife, and as I said, its not just in the UK, its Global, that it transpires this way.  So that was my little rant on the Family Court System.