The Freedom Programme format for training purposes is drawn from the stereotypes of female victim and male perpetrator, but is applicable to male victim/female perpetrator and same sex couples. This training is appropriate for any groups of people regardless of age, gender, lifestyle, race, religion or culture.

The Bully: Sulks, Smashes things, Gritting their teeth, Displaying weapons, Stalks you, Kicks walls and doors, Secret gestures – only you know, Drives too fast with us in the car, Cold eyes.

The King of the Castle: expects dinner on the table as soon as he’s home, takes all the money, burns dinner, comes and goes as he pleases, ‘helps me’ do the house work, ignores the housework until we do it, pretends he can’t cook and clean, has his own chair no one else is allowed to use, complains if I spend money – even my own, asks us where his things are eg ‘where’s my shirt’.

The Jailer: Leaves the room when friends visit, tells me my friend made a pass at him, creates a row when I want to go out, has affairs with my friends, tells me my friends don’t like me, goes everywhere with me, doesn’t take a key when he goes out, hides my shoes, keeps me pregnant, moves me away from my support networks.

The Badfather: tells the kids I’m stupid, uses the court system to continue abusing me, refuses to ‘baby-sit’, denies paternity, tells me I can leave but the children stay, asks the children to check up on me, contradicts my parenting of the children, hits me when the children are in the house, tells me and the authorities I’m a bad mother, demeans me in front of the children.

The Persuader: tells me he’ll kill himself, says he has nowhere to go, threatens to report me to Social Services if I leave, cries on the doorstep, threatens to kill the children if I leave, promises to see Relate counsellor if I have him back, states, “unless you take me back I will follow you to the ends of the earth”, says I must have him back he’s terminally ill, attempts suicide, promises to go to ‘anger management’.

The  Headworker: Objectifies and compares our physique with others, tells other people our secrets, tells me I’m ugly, has affairs with other women, makes me feel guilty, makes me think I’m going mad by moving furniture and denies it,  doesn’t use my name, tells me I must be suffering PMT,  tells me Im useless, uses the word, ‘woman’ as an insult. 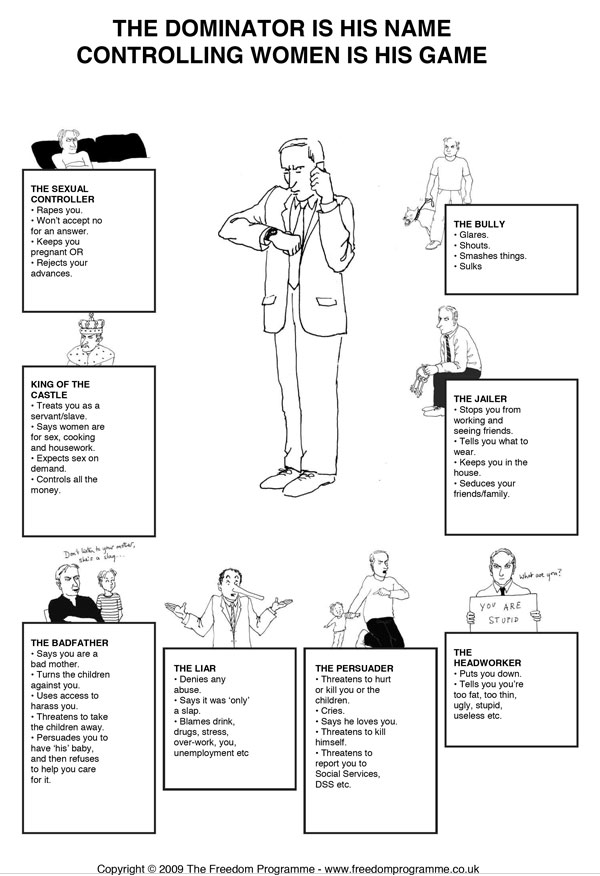 The Lover: Show’s physical affection without assuming it will lead to sex.  Accepts that you have a right to say “no” to sex. Shares responsibility for contraception.

The Friend: Talks to you. Listens to you. Is a companion. Has a sense of humour. Is cheerful and consistent.

The Partner: Does his share of the housework. Shares financial responsibility. Treats you as an equal.

The Goodfather: Is a responisible parent. Is an equal parent. Supports your dealings with the children.

The Truthteller: Accepts responsibility, admits to being wrong

The Negotiator: Takes responsibility for his own well-being and happiness. Behaves like a responsible human being.

The Confidence Booster: Says you look good. Values your opinions. Supports your ambitions. Says you are competent. Values you. 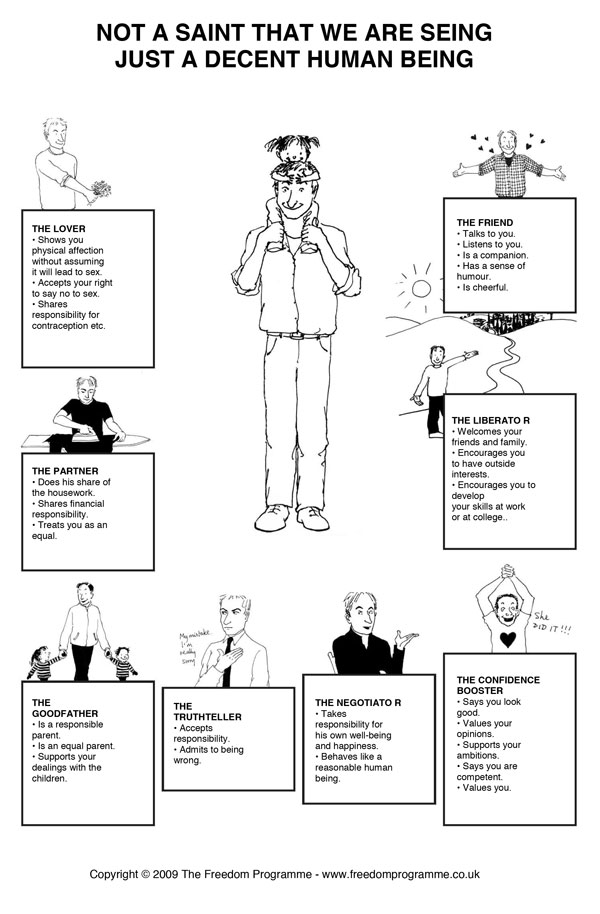