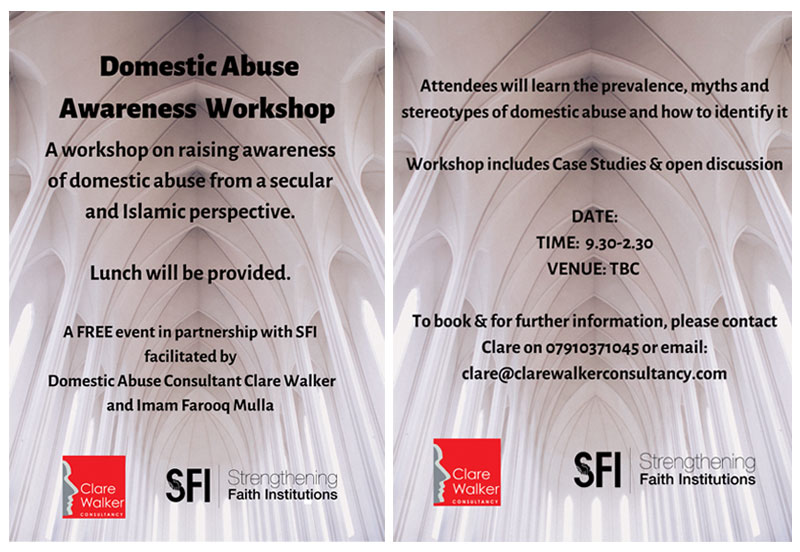 I wanted to talk about an area of work that is starting to become more widely accepted as a norm, as a known, and as something that needs addressing – those interesting links in terms of domestic abuse and faith.

Not that I have ever been told that there are any books of faith that say that it is okay and recommended for one person to maim or murder another. I have yet to be proven wrong on that. Until that point, I will stand by the fact that a perpetrator of abuse will use anything as leverage to increase their power – in these cases, its faith. But in terms of utilising the faith, a perpetrator will, of course, utilise their faith to increase the level of control that they have on their victim.

Sadly, this can be wider impacted and experienced by the victim if there is significant trauma inflicted around their faith practicing, including just sitting and reading their book of faith or praying or perhaps even where they go to pray? For some victims, where they go to pray might be the only place that they do experience trauma, specifically in terms of emotional, psychological, and sexual abuse; that can sometimes be inflicted by their faith leader. It can be inflicted by a member of a congregation. It can be inflicted by their partner, spouse, husband, family member, whoever it is. But it can also be colluded with more widely by the community that a victim is a part of in terms of their faith.

This is absolutely damning; it is so cruel. To see the impact on someone who uses their faith to keep them strong, to try and rationalize their life experiences in the moment or of their past and where they aim to go in the future. It’s absolutely damning when that place of inspiration, comfort, and aspiration, is tainted at best but, as I said, linked significantly with trauma as well.

In the work that I do with clients, I have come across the use of faith to increase abuse more and more in recent years, but I’m not assuming it’s a new area of practice for abusers – far from it. However it does seem to be that people are actually increasingly talking about it, both leaders as well as victims and acknowledging the need to address it.

As a society, we’re not really dealing with it, and there is still far too much of agencies or individuals colluding with their ignorance of a cultural practices, especially if it isn’t a culture, they identify with directly themselves. I mean that in the kindest possible way, but I hear it all too often and from places where you would expect a definitely increased insight, at best. I have lost count how many times I have had to explain in many arenas over the years the disparity between faith practices and cultural practices.

So on the back of all of this, I was really delighted to be contacted by a faith leader after I had attended a conference on domestic violence in faith communities. The event was presented as a multifaith issue: various different faith leaders and academics discussing and presenting throughout the day, as well as fabulous survivors as there always is in the arena’s of domestic abuse.

This particular faith leader is an Imam, and because he lives local to me, we decided to do some work together. Firstly, we set up a workshop pilot just to test the water and see how things were. What I found most interesting was, when I started marketing the workshop, that some people within the community and some people outside of the community viewed that pilot workshop to be targeting that one community, which I thought was quite an interesting way of trying to shut down a conversation. However I don’t really buy into being shut down in conversations, especially when there are victims whose voices need to be heard, need protection and representation.

Myself and the Imam set up the pilot workshop in partnership with a good friend at Zinthiya Trust, where a room and refreshments were provided. We had 16 people attend on the day obviously some were local to Leicester, others from other cities in the Midlands area, and some had come up from the anti-terrorism team in South London. We had a very safe and respectful, open discussion. I gave an introduction to basic domestic abuse and the Imam spoke on spiritual abuse using the reference point of the Quran and what it actually says, as well as what is relevant in today’s society.

So that was where we started with it, and we were both — myself and the imam — very pleased with the engagement level, which just cranked up our desire to want to get it out to more people at the grassroots level in the communities, so that it resonated, so people could learn and maybe even have increased reporting.

Unless we started bringing this conversation out safely into the light to discuss it, then there is never going to be progress in any way, that is going to be enabling and educational for victims but also for perpetrators who need to learn about what is acceptable behaviour and what isn’t. Abuse never is.

On the back of that, I was very delighted to be contacted by Strengthening Faiths Institute. A rabbi in London, contacted me asking if myself and the Imam would be happy to do these workshops on behalf of Strengthening Faiths Institute, which of course, myself and my good friend are very delighted to be able to offer this, taking it to different areas rather than just on our doorstep. We are planning on delivering a workshop in Manchester, one in Birmingham, and one in London in the up and coming months.

You can see from the flyer above there are not yet any dates and venues. We are busy sourcing those, but as soon as we do, it will be out there on Twitter, Instagram, Facebook, and LinkedIn. So please do keep your eye out and drop me a line. Let me know you’re coming. It would be great to see you. It’s a free event. All are welcome, whether you’re of faith or not. There’s a free lunch, so you can’t really say much better than that. If you can’t make it or even if you can, please do share the word and let people know that it’s happening!